Italian symphonic metal legends RHAPSODY are currently touring the globe with their »20th Anniversary Farewell Tour« . In February/March they’ll finally enter European club stages. Today, the band can reveal two support bands for this upcoming journey: Opening will be Romanian metal outfit SCARLET AURA. Direct support will come from no less than up and coming heavy metallers BEAST IN BLACK, presenting their recently released debut album »Berserker«. This package is definitely not to be missed! 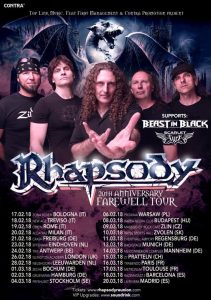 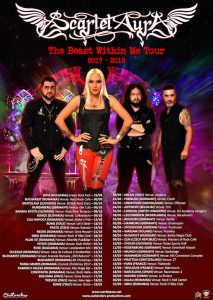 Scarlet Aura emerged as one of Bucharest’s most exciting new acts after claiming the winning spot at the Kavarna Rock Fest battle of the bands competition in 2014 in Bulgaria, proving their worth and talent, winning the hearts and votes of the audience and since then – have been winning the hearts of fans worldwide.

A turning point in the journey of Scarlet Aura was joining Tarja Turunen on her »The Shadow Shows Tour« in October 2016 that coincided with the release of their second album »Falling Sky«. Nine concerts with Tarja made the band known in Germany, Switzerland and Austria and made the public very interested in the band and music.

In the second half of 2017 to march 2018 the band brought headlining shows,  46-concerts »The Beast Within Me« tour to over fifteen countries in which most notable ones are 24 dates as supporting act with the Beast in Black (FIN) for Rhapsody Reunion’s 20th Anniversary Farewell Tour.