“THE BEAST WITHIN ME” – A NEW SINGLE BY SCARLET AURA

SCARLET AURA – THE ROMANIAN FEMALE FRONTED MELODIC ROCK/METAL BAND RELEASES A NEW SINGLE ACCOMPANIED BY A VIDEO: “THE BEAST WITHIN ME”!

Scarlet Aura became well known to the international metal fans after winning the first edition of the contest The Black Sea Battle of the Bands in Kavarna Rock Fest in 2014 in Bulgaria and even more so after touring with Tarja Turunen in 2016 in Germany, Switzerland and Austria. A new record deal with the Finnish company Outlanders Productions brought the Romanian act and their music closer to the West and North of Europe and thus the first material is promptly released.

The single presents three previously unreleased songs: “The Beast Within Me”, feat. Florin Costachita and available exclusively here, the cover “Don’t Talk to Strangers” (Ronnie James Dio) that anticipates the upcoming album “Memories” scheduled to be released in September 2017, and the live cover “If I Close My Eyes Forever” (Lita Ford feat. Ozzy Osbourne) from the “Falling Sky” tour concert in April 2017 in Bucharest, Romania, that will be released as a live CD & DVD in spring 2018. 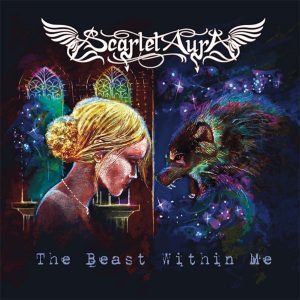 “The Beast Within Me” tracklist:

The Beast Within Me (feat. Florin Costachita)
Don’t Talk to Strangers ­
If I Close My Eyes Forever (live)

Says the singer Aura about “The Beast Within Me”:

“As a song writer Mihai wanted to make a song featured with a male growl voice I could play with and he chose Florin for this. The song was composed with the intention to seduce the listeners into the complete opposite charm of these two powerful voices, imagining the fight between them, a fight that in the end reveals a melodic beauty.”

The cover of “If I Close My Eyes Forever” turns the famous duet into a one-voice hymn:

“We are very fond of this song and we really think it fits to our fears and emotions. I end up crying when I sing it, living every word and note, transforming it into a one voice message that somehow became ours.” A studio version of the song will be included in the upcoming album “Memories”: “We realized how blessed we are taking part of this miracle that it’s called music and all other writers and bands inspired us and made the sparkle become fire within us, and how many memories we have with their music alongside…. this is how the idea of the album was born.”

The band Scarlet Aura started its adventure as AURA in 2014 releasing their first album “The Rock Chick”. The rebranding of the band came in 2015 with a better-defined identity that says everything about their electric personality and reflects their will to have a unique name in the international music industry.

The lead singer – Aura Danciulescu, the apparently frail little blonde vocal with an electrifying voice and charismatic presence, got the nickname “The Princess of Metal”. She received this title, as she impressed the public not only with her voice but also with her stage presence and style, wearing unique costumes and props. The lyrics written by her are the mirror of her spirit and visions that let us see deeper in her unique way of breathing life.

A turning point in the journey of Scarlet Aura was joining Tarja Turunen on her The Shadow Shows Tour in October 2016 that coincided with the release of their album “Falling Sky”. As the interest in their music started to grow and more and more promoters started to show them to the world they demonstrated that Scarlet Aura fits perfectly into the contemporary metal scene. The single gives the name also to the new The Beast Within Me Tour that is scheduled to start from Bulgaria in September 2017. The shows will present the new material together with the already well known songs from their previous albums.

“Impressive, with a lot of playfulness and a singer who not only convinces through vocal quality (…) Scarlet Aura always manages to incorporate paintbrushes into the already entertaining set, whether with Indian feather jewels or angel wings (…) plus a great sound and even clever lighting. This is unfortunately rare enough with support bands, but everything is right here today. How else would you explain the furious applause?” – crossfire-metal.de

“After this, the Scarlet Aura sound could be described as melodic hard rock touched with a metal edge, but with some nuances (…) The girl can sing, the songs rock, and there was enough variety and invention to keep me interested. Recommended.” dangerdog.com

“[In the] … cover versions of “Don’t Talk to Strangers” and “If I Close My Eyes Forever”, I can’t help noticing the band’s approach to the reworking of these songs. There is not only the professional performance of rock hits, but also the feelings that Aura puts in every line…” MetalGossip 8/10 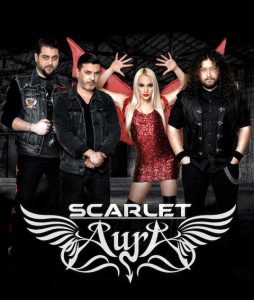