Upon the release of their 3rd studio album, ‘In-Between’ by Ikaros Records, Sediment Bruise in cooperation with Northwest Hardcore Booking Branch, are putting up live shows in order to promote their record in Eastern EU and they are celebrating it by presenting to you the music video for ‘The Shore’, produced and directed by Michael-Angelo Nikolaidis.

‘In-Between’, which was produced by Clive Martin together with Sediment Bruise, was warmly welcomed by fans and critics all over the globe, receiving outstanding reviews:

“… ‘In-Between’ is one of those albums that meanders along, punctuated by energetic portions here and there. It’s not meant to be high energy all the way through, but it is meant to be emotional, almost like the burning feelings inside a mentally numb person. I think the band achieves that very well, and the explosions are worth the wait…” The PROG Mind (USA, UK) 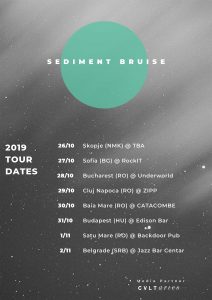 “…The vocals are indeed something that immediately catches attention. They are unorthodox, uniquely colored and often dispersed. They align well with the loud, guitarsynth music and catchy melodies. And the atmosphere of the album is the work of airy backing vocals and violins…” Labandzi Spiew (PL)

“… Listening to ‘In Between’, everyone will feel something different for sure. But we will all feel something, just enough to be sure our heart is still beating…The sound of ‘In-Between’ is so stellar that makes you think and in general it makes your brain work intensely…” @ToYpogeio

“…The first great record of 2019 is already here…” @tospitimetaparaxena

“…The album stands out for its recording and production quality, which puts it one step (or more) ahead…” Δισκορυχείον/Vinylmine

“…While, in the beginning, you think that there is just another good album, a strange relationship is being built and the tension keeps strengthen and you just want to listen to it more and more…” Elektrospank Online Magazine

“… ‘In Between’ levels up Sediment Bruise, who achieve their targets one by one, with wellthought and steady steps. Congratulations! …” RockYourLife.gr

“… ‘In Between’ is a well-structured record in any aspect (compositions, production), that shows a band who constantly explore their sound and are fully aware where they stand. An amalgam of sounds and moods that is absolutely successful…” RockinAthens.gr

“…If there is a band who, with acts and not publicity, prove that they grow dangerously to stay in the narrow limits of Greece, this is Sediment Bruise from Thessaloniki … The tracks of ‘In-Between’ are one better than the other! …” Music Borders Radio

“…The outcome is naturally, as always, unique, full of passion, with plenty of artistic madness and masterful execution…” Sterea News